ABF in Africa: Meeting our family! 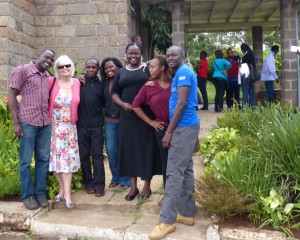 When ABF’s Director of Programs, Marilyn Jones, set off on a six-country trip to the UK and Africa in April, she says she knew it would be an adventure—but she came home with so much more than pictures and memories. She returned to Sacramento inspired and re-energized. And what inspired her so much? “Our fellow Christian Scientists,” she says. “

Marilyn met with dozens of ABF’s recipients—students, volunteers, and former recipients now starting their careers. She says everyone made her feel not only welcomed to their countries and their churches, but as part of the family, whether in groups or individuals one-on-one, sharing lunches, dinners, afternoons and evenings. Often as the only American in these groups, she says  she learned from meetings with the students and members how to bridge misperceptions about ABF.  Together, they worked through questions about the application process, which in turn gave her new and creative ideas to bring back to California.

We can’t wait to hear what she and our Administration Manager, Jen Day, report on their May trip to the Philippines to visit our Christian Science brothers and sisters in Manila and Baguio City.  So stay tuned…

This entry was posted on Monday, August 19th, 2013 and is filed under News, Updates. You can follow any responses to this entry through the RSS 2.0 feed. Responses are currently closed, but you can trackback from your own site.

Latest News from AlbertBakerFund.org US site